We are the Cure! 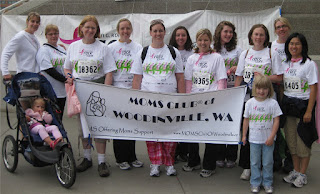 This Sunday my MOMS Club friends and I walked and ran with thousands of others in the Susan G. Komen Puget Sound Race for the Cure. It was a sea of pink of white walking up and down the Viaduct as we all made our way 2.5Km away from Qwest Field and 2.5 Km back again. Along the way we were cheered on by teenagers standing on the sidelines chanting "Mammograms and Breast Exams" and such. Some of the names of the teams were great. I saw one called "Save the Tatas", one that read "Save Second Base", another that said "Boobs: Love 'em, Rub 'em, Save 'em". Several people, men and women, were decked out in pink tutus, pink wigs, sequins, and hats with flamingos. One woman walked with a stroller filled with a half mannequin painted with pictures and slogan such as "I've faced death now I embrace life". But the most memorable things of all were the pink papers a lot of people had pinned to their race numbers. They said "In celebration of..." and "In memory of...". So many people had long lists of friends and family members who were survivors of breast cancer and many who had lost their battles. At the end of the walk we made our way back to the field where we watched the Survivor Parade. Here hundreds of women walked behind signs designating how many years they had survived breast cancer. Some of those brave women had survived 25+ years and some were under a year.
It was a very inspiring day! Our MOMS Club team exceeded our $2000 fundraiser goal for the race, raising $2735. I also exceeded my personal goal of $500 and raised $790! Thanks to all of you who supported me or the MOMS Club team. To make a donation to the Susan G. Komen foundation click here. We are the cure!
Posted by Angie H-P at 2:47 PM

Email ThisBlogThis!Share to TwitterShare to FacebookShare to Pinterest
Labels: friends