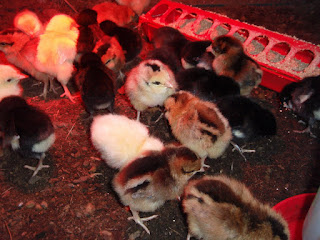 Baby chicks have to be one of the cutest things in the world! They're soft and fuzzy, curious, playful and just downright adorable. I love watching them. We have our 25 new chicks in our greenhouse right now. They get a little startled when you open the door and walk in, but after a few minutes they get used to having these 2 giant feet standing in their room. They love to huddle together in a pile under the heat lamp standing on top of one another. And just like babies, they want to sleep a lot. A chick will be standing there and all of a sudden it will fall forward fast asleep with it's beak in the dirt. Other chicks can walk all over it and even step on its head but the chick just stays asleep. The first time we raised chicks I got really worried when I saw this. I thought "Well, that's it, we just lost a baby chick. It's dead." Then about a minute later it'd get up and walk around. Every now and then they seem to just need to move and will run across the floor like something's chasing them or flap their little almost-wings and try to fly. They don't seem to be scared of us at this age and the kids can squat down and pick one up without it even trying to run away. They also like shiny things and will peck at my ring or at the shiny bits on my shoes. The only part I don't like about baby chicks is that they grow up into ugly in-between chicks before they become hens. I guess chickens have an awkward phase, too.
Posted by Angie H-P at 2:15 PM

Email ThisBlogThis!Share to TwitterShare to FacebookShare to Pinterest
Labels: Being Green, Chickens, Gardening