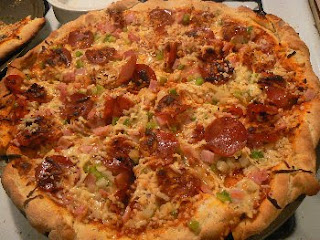 So following my theme of making healthy food that I hope the family will like to replace the less healthy version they've been eating, I made my own pizza dough for pizza dinner last night. I got the dough recipe from Baraba Kingsolver's Animal, Vegetable, Miracle (http://www.animalvegetablemiracle.com/Pizza.pdf ) then used Classico bottled pasta sauce and shredded mozzarella. (I'm hoping to make my own Mozzarella at some point from the recipe in this book, but didn't have the time or ingredients last night.)

Once the dough has risen, divide it in half and roll out two round 12 inch pizza crusts on a clean, floured counter top, using your fingers to roll the perimeter into on outer crust as thick as you like. Using spatulas, slide the crusts onto well floured pans or baking stones and spread toppings.
16 oz. mozzarella, thinly sliced
2 cups fresh tomatoes in season (or sauce in winter)
Other toppings
1 tbs. oregano 1 tsp. rosemary Olive oil
Layer the cheese evenly over the crust, then scatter the toppings of the week on your pizza, finishing with the spices. If you use tomato sauce (rather than fresh tomatoes), spread that over crust first, then the cheese, then other toppings. Bake pizzas at 425° for about 15-20 minutes, until crust is brown and crisp.
I used pizza stones and sprinkled corn meal on them before putting dough on top. I thought they were much better than frozen and almost better than delivery. Son didn't like that they were different than he was used to but daughter loved it. We'll try again with leftover pizza tonight and see if he likes them better the second time around. :)
Posted by Angie H-P at 2:01 PM