Something about the garden for a change 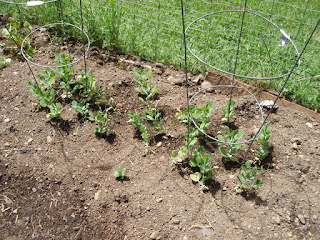 Well, I've been talking mostly about cooking lately and thought I'd post something about the garden instead. Hubby and I have gotten about 98% of the garden weeded and about 80% of the planting beds are topped with our homemade compost. I've gotten some of the seedlings planted and a few seeds put into the ground for direct planting. But even with all of that done I feel behind for some reason. I looked at my blog from last year about this time and we were just getting the first greens of the season from the greenhouse. This year I'm at least a month ahead of schedule on that front, but I still feel like I'm behind. 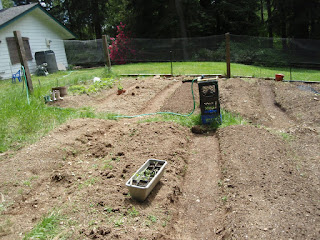 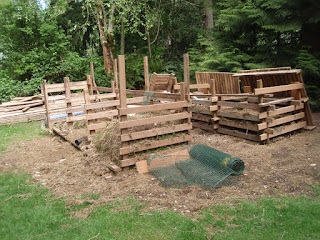 So far I've gotten the peas, pom pom lettuce, miner's lettuce (still not sure about this one as it appears to be bolting already but still tastes ok), scallions, leeks, potatoes, spinach and 1/2 of the red beet seedlings into the garden. I direct sowed corn this past weekend, and as soon as those sprouts come up I'll put soybean seeds next to them. Soybeans, green beans and peas are nitrogen fixers that put nitrogen back into the soil while most other plants take it out. The corn needs lots of nitrogen, which makes soybeans a perfect planting partner for it. I'll also add some blood meal to the corn patch once the seedlings get about 3 inches tall to add even more nitrogen. 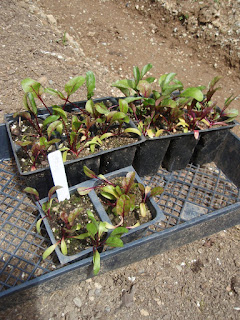 I still have carrots, red cabbage, broccoli, golden beets, pumpkins, pole beans, soy beans, romaine lettuce, cukes, butternut squash, zucchini and the last half of the red beets to put into the garden. This year I decided to try a few new veggies I've never grown before. I've started some Okra and Artichoke in the greenhouse. The okra is starting to sprout, but so far there's nothing to see in the Artichoke pots. I grew up in the south, so I'm really looking forward to the okra. I haven't had it in quite a while and would love to have some made just the way Mama used to make it. Yum! 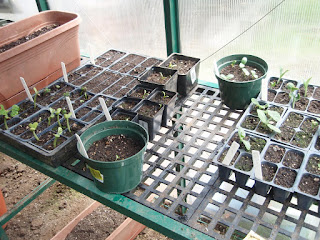 This year the rhubarb is looking really pathetic. I don't know much about rhubarb; so I'm not sure if the plant is just old and needs to be replaced, if it needs more nutrients of some sort, if it needs to be moved to get more sun, if there's a pest eating it or if it's something else entirely that's causing the stalks to be tiny and the leaves to be yellow-ish and full of holes. Maybe it's a little bit of all of those problems. I'm thinking of buying a few more plants or trying to start one from seed and then planting it somewhere else in the yard.
I'm also planning to move our blueberry bushes and raspberry plants from another part of the yard into the garden next to our gorgeous strawberry plants. Both the blueberry and raspberry are not thriving where they are for any number of reasons, so by putting them in the garden I hope to give them regular water, sun and nutrients they don't get now in their neglected corners of the yard. 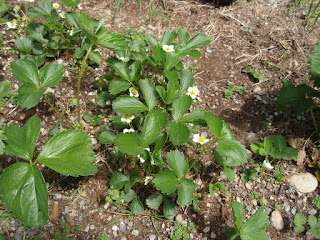 So, all in all I guess the garden is going pretty well. But I can't help but think I'm forgetting to plant something...and no, it's not tomatoes! Tomatoes and I don't get along in general. Although last summer was a pretty good year for tomatoes in my garden. I didn't plant them; they were volunteers. But I did get a few handfuls of cherry tomatoes that ripened on the vine, which is a first for me. I've been considering buying a few tomato plants from a guy down the road just to have something to fancy up our new deck. :) Maybe if I don't start them from seed on my own they'll consider growing for me.
Posted by Angie H-P at 8:29 AM