Chickens in the Snow 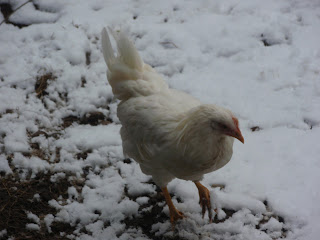 Those of you with chickens know that chickens generally do not like snow. I suppose if I were a chicken I wouldn't like it either. They have bare feet, and snow is cold! And it's unlikely that any bugs or worms are hanging out right under the surface of the ground when it's freezing. So there's not much chance of finding "wild" food while digging around in it. 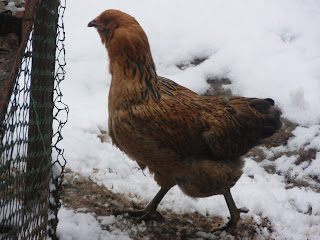 The main reason they don't like it is probably because it's unfamiliar to them, and unfamiliar rarely means good things to a chicken.
Our younger chicks, however don't seem to have the usual aversion to snow. While the older hens are staying cooped up where everything is a soothing, although stinky, brown color the chicks are right out there in the middle of the fluffy whiteness. 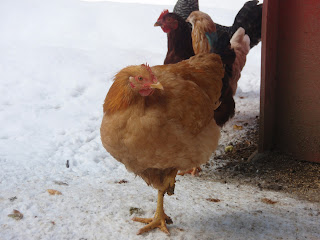 I couldn't resist snapping a few pictures of the adventuresome chicks wondering around in their newly decorated garden. I even found one chicken who usually glows in the brown garden using her new stealthy camouflage to her best advantage.

At one point while I was watching the chickens stand around in the snow I thought I had a flock of storks rather than chickens. They were all standing on one foot warming the other one under their feathers!

Also notice our low rider black fuzzy footed hen in the bottom picture. I just love the way she waddles around. If it wasn't for the fact that all of those cute fuzzy feathers covering her feet get really yucky when it rains I'd want a whole flock of those just for the entertainment factor. 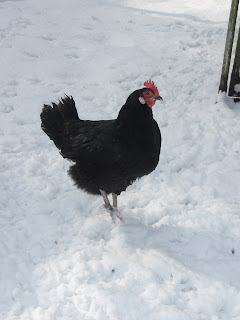 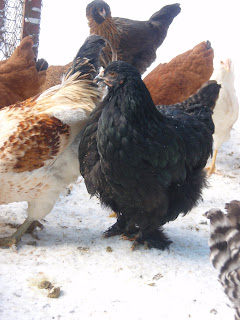