Quinoa for Breakfast, Lunch or Dinner! 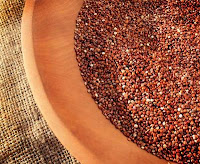 I have eaten the same thing for breakfast for a very long time now with very few exceptions. Hubby usually makes pancakes or french toast on Sunday, so I'll switch my morning meal on that day, but otherwise I'm pretty boring when it comes to breakfast. I like to eat Cheerios with a sliced banana and rice milk. It fills me up, is sweet enough to satisfy that morning sweet tooth and is pretty good for me. But when I saw this recipe for quinoa pudding with cranberries and raisins from Poor Girl Eats Well I knew I'd have to shake up my morning eating habits to include this one every now and then. This dish uses milk and brown sugar along with the quinoa to make a creamy pudding that is further embellished with the cranberries and raisins. I think sprinkling some walnuts or slivered almonds on top would be very yummy as well.
Quinoa is an awesome food!  It has a very high protein content, between 12% and 18%, and contains a balanced set of essential amino acids, making it a complete protein. It is a good source of magnesium, phosphorous, iron and dietary fiber, and it's gluten free! I heard recently that some of the poorer cultures  in South America have remained relatively healthy throughout history due to the quinoa that grew in their area.

Quinoa is great in savory dishes as well as sweet ones like this pudding. I've made a southwest quinoa dish with corn, tomatoes and beans that's really yummy. Throw in some shrimp or grilled chicken and you've got a complete meal in one dish.


1. Heat the oil in a saucepan over medium heat. Stir in the onion and garlic and saute until lightly browned.
2. Add quinoa and vegetable broth to the onion mixture. Stir in cumin, cayenne pepper, salt, and pepper.
3. Bring the mixture to a boil. Cover, reduce heat and simmer 20 minutes.
4. Stir in corn, beans and tomatoes then simmer about 5 minutes until heated through.
5. If desired, top with grilled chicken or shrimp before serving.

I listed this recipe on Homegrown Learners Wednesday Recipe Link up.
Posted by Angie H-P at 2:41 PM