There's something that Hubby and I have been discussing for years. We've both researched it from one end to the other in books, websites, discussions with friends and acquaintances who have gone through the same thing. We've thought about the impact it would have on our kids. Would it scar them for life or would they take it in stride just as they do other issues that come up in our lives? Well, after years of talking about it, planning it, researching it and sometimes dreading it, we finally did it! What is it, you ask, gave us such worry? What could cause such deliberation and thought provoking discussions? Obviously I'm talking about the slaughtering of our dear, pet, noisy, fat roosters!

Several weeks ago, Hubby did the deed and culled 3 of our older roosters and 3 of our older hens. Then this past weekend he culled 4 of our young roosters. We were worried about how the kids would handle seeing or even knowing that we'd killed some of the chickens that used to run around the yard like pets. Would they cry, would they be ok with it, and even more importantly would they eat chicken again? Surprisingly the kids were fine with it. When they saw me going back into the run trying to grab another chicken to cull they helped me pick which one would go. "Should I take Red or Fluffy?" (yes, we had a rooster named Fluffy.) "Take Fluffy, he's mean!" And then later in the week when I cooked up Fluffy they ate him with little more protest than they usually do at dinnertime. 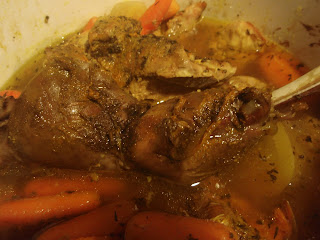 For the older roosters and hens, which didn't have the skin left on, I slow cooked them in the crock pot with some veggies and herbs to try to tenderize them a bit. The older roosters had the darkest thigh and leg meat that I've ever seen! I'd call it red meat rather than just dark meat. But I guess our roosters did a lot of running and jumping, which would darken the meat much  more than a factory rooster that spends its short life in a cage. 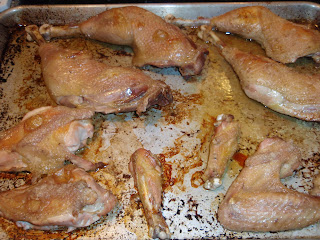 The younger roosters were roasted with the skin left on. It seemed much more oily than the birds you get in the store, but was sooooooo good!


Roasting the young birds consisted simply of putting the pieces skin side up on a cookie sheet, rubbing skin with a little butter then sprinkling a tiny bit of salt and pepper on top. I roasted at 350 degrees for about 40 minutes. I turned the broiler on in the first 10 minutes just to crisp up the skin, but I think that's optional.


Now that we have a few less roosters in the yard we should be able to mix our 2 flocks together getting the younger birds out of my garden. They've weeded it nicely and now need to go! I've got seeds started in the greenhouse and would like to get to work prepping the garden for planting some things outside. The chickens did destroy my strawberry plants, though, so I'll need to buy a few flats to replace mine.

I'm also glad that we've got some chicken in our freezer that I know has no antibiotics or hormones or other nasty stuff in it. I was there when those chicks arrived in the mail, and I saw them throughout their life. Other than the bugs, worms or weeds they found I'm pretty sure I know they ate throughout their life, and I know what kind of a life they had. And those are probably the most important things I want to know about the meat we eat.
Posted by Angie H-P at 4:33 PM