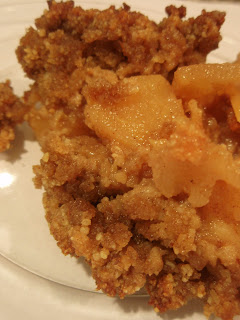 The other day was Pi day (3.14), and as we all know you have to eat PIE on Pi day. Pie doesn't necesssarily fit into my Primal/Paleo lifestyle experiment, but I thought I could come up with something that would work just a well. Hubby requested an apple dish, which is by far his favorite dessert. He orders the apple-whatever every time we have dessert in a restaurant. Apples sounded good, but I had to come up with a crumble topping that would actually crumble. I usually use oats, flour and butter as the backbone of my crumble topping, but obviously none of those would work. So I gave almond flour and coconut oil a shot. I think the result was quite tasty, and the rest of the family agreed! 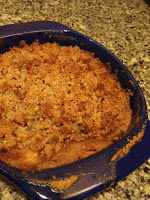 1. In one bowl combine flour, nutmeg, salt and 1 tsp of cinnamon. In another bowl combine oil, syrup and vanilla. You may need to warm the coconut oil until it's a liquid.
2. Stir wet ingredients into dry to make the topping.
3. Place apples in a 1-2 qt glass dish then sprinkle them with remaining cinnamon. Pour apple sauce on top of apples.
4. Crumble topping over apples.

5. Cover and bake at 350 for about 45 minutes. When filling is bubbling up around crisp, remove cover and bake for another 5-8 minutes until crisp is golden.