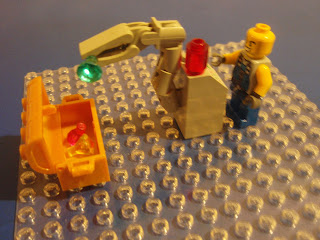 This past week was Spring Break, and my kids and I wanted to do something fun and interesting with our free time. While looking through the summer camp catalog a few weeks ago my daughter was interested in the claymation class, but it didn't really fit into our plans for summer. So, we decided to give it a try on our own. We researched stop-motion animation online and found several tutorials that described the process and even gave step-by-step instructions on things like making a Lego Minifig walk. My friend Kate, also sent me a link to the Adventures of Morph, a pre-Wallace and Gromit British claymation show. The kids loved that one, too, and got lots of ideas.

But probably the best advice we found was a suggestion to use Windows Movie Maker to turn our still images into a movie file. I had no idea my computer already had that installed on it. And it worked great! Here are the steps we took to make our movies.

1. Decide on a very simple idea to film. Most of our movies were extremely basic and included things like a minifig driving a car across the screen and turning to wave at the camera somewhere in the middle. Another idea was an action figure raising his hand to wave or to Hi-5 another action figure.
2. Set your stage. Use a solid color table or board on which to place your "actors". Set the stage in front of a blank wall or hang a sheet or pillow case on the wall to make it blank. If you are using LEGO, use sticky tack or double sided tape to anchor your LEGO base plate so it doesn't move around.
3. Anchor your digital camera on a tripod then find the best camera setting to get focused shots. I used my macro or super macro setting to do most of our filming as we were using very small objects as our actors.
4. Use lots of lights. We turned on every light we had in our filming room then I DID NOT use the flash on the camera. Flash on the camera did not look good at all in the movie.
5. Take at least 30 to 40 pictures to complete your 5-10 second movie.
6. Using Windows Movie Maker import all of your pictures
7. Adjust the time for each picture to .3-.7 seconds per frame. Most motion frames were timed at about .3 seconds, but ending shots or other shots that have any writing to read should last about .7 seconds.
8. Save your frames as a movie.
9. Do the happy dance after watching your super cool movie a few dozen times.