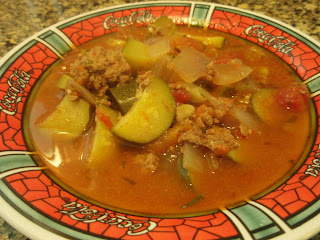 Some days there’s nothing better than a big pot of soup for dinner. The aroma infuses the house with that comforting smell and makes you ready to eat even if it’s not dinnertime yet. Today I had a hankering for beef soup. And given that I just bought ¼ of a grass-fed cow last week, I had some beef ready to use! I also get a veggie box from Mother Nature’s Organics once each week that stocks my fridge with yummy organic produce. I pulled some of that out today to add to the soup as well. I’m a fan of refrigerator soup. You know, where you just throw every veggie in the fridge into the pot. So that’s basically what I did. This week I got some fresh Tarragon in my veggie box. I've never really been good at cooking with fresh herbs, but since I had it, I used it. The Tarragon gave the soup a nice peppery taste that I didn't expect, but it was really good. Give it a try and enjoy!

Brown meat and onions then add with all other ingredients to a large soup pot. Bring to boil then simmer on low for about 1 hour or more.
Posted by Angie H-P at 7:44 PM