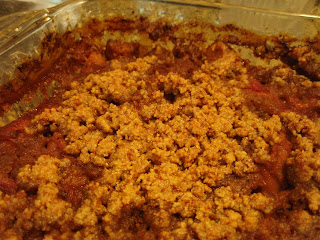 The first really veggie (or is it a fruit?) to be ready to pick in my garden is rhubarb. This nice old rhubarb plant was already in the tiny garden when we moved into our house. Over the years it has been one of my more consistent producers even through the mild wet summers like we had last year. Hopefully this year it will be just as prolific or more so. One of my family’s favorite uses for rhubarb is the rhubarb crunch. In the past I’ve made a crunch topping using oats and flour, but this time I tried the almond flour crumble topping that has become my favorite since my paleo/primal experiment started a few months ago.

I also used Coconut Crystals in place of sugar. According to the package:


When the coconut tree is tapped, it produces a naturally sweet, nutrient-rich inflorescence (juice or "sap") that exudes from the coconut blossoms. This sap is very low glycemic (GI of only 35), diabetic-friendly, contains 17 amino acids, minerals, vitamin C, broad-spectrum B vitamins, and has a nearly neutral pH. It is a raw food, gluten free and vegan.

The result is a little different in texture than what I was used to with traditional recipes since it didn't have that oats-and-flour crumble, but it is quite good and was a hit with the whole family. 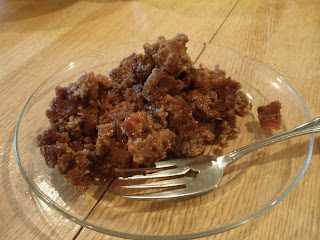