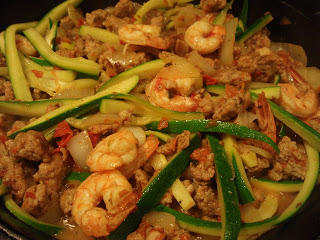 I was reading some new posts from my favorite blog list the other day when I ran across this post for "Spaghetti" in creamy tomato sauce at Everyday Paleo. I liked the idea of using zucchini strips as spaghetti and just so happened to have some in my fridge. I didn't have all of the other ingredients, and as I'm apt to do I made quite a few changes before arriving at my own version of the meat and veggie dish I served for dinner.

I had some chicken sausage thawed and had some frozen shrimp in my freezer. So I thought I'd combine those 2 along with some veggies I found in the fridge to make a primal/paleo version of Jambalaya. The result was quite good and I'll definitely be making it again. My zucchini strips were a little unwieldy when eating the dish; so next time I'll probably just chop them up and throw them into the pan with everything else. It wasn't like I was fooling anyone with the "spaghetti" anyway since I made real pasta for the kids. But it was an interesting experiment and maybe when the kids get older they'll think it's fun to eat zucchini noodles.

Traditionally Jambalaya is supposed to contain rice. So I suppose you could add riced Cauliflower to the dish at the end instead of adding the zucchini noodles. I can see lots of possibilities with this dish. The sausage and shrimp combo was really good but could be changed up by adding different veggies.

Zucchini spaghetti and the Jambalaya before adding zucchini.

Brown sausage in bacon grease then brown onions. Add tomatoes and pico de gallo. Cook uncovered until bubbly. Stir in shrimp and zucchini then cover and cook until shrimp are pink and zucchini is just al dente.
Posted by Angie H-P at 6:15 PM