Hens in the Rhodies

We still have 4 feral hens...or rather we have 4 feral hens again as most of the ones who were sleeping outside the coop earlier in the spring and summer got to see the inside of a raccoon's stomach. I don't know why they want to sleep in the rhododendrons rather than inside the coop where there is ample space for them and their roost-mates. It's been getting fairly cool here at night, and you'd think they'd want the warmth of all of those other chicken bodies to keep them toasty at night. But not these gals. They like to sit in the Rhodie and leave a manure trail down all of the leaves below them. Yeah, that's attractive.

I decided to try to get pictures of them last night when they climbed up into the tree. Three of them are Barred Rock and one is a Brown Leghorn. The first picture is from me trying to photograph black-ish chickens in the dark without a flash to startle them. The second is from me getting frustrated at the black-ish hens moving around and getting spooked by my walking around them anyway, so what the heck I'll turn the flash on. Neither is great, but there you go. 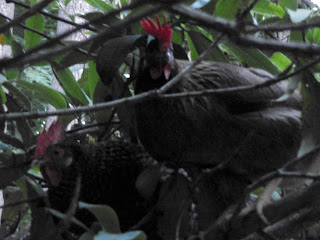 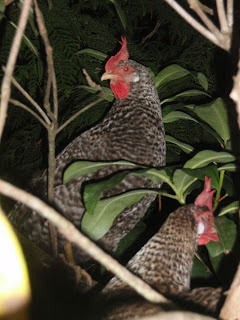 Email ThisBlogThis!Share to TwitterShare to FacebookShare to Pinterest
Labels: Chickens