Our Family's Favorite Books to Read Together 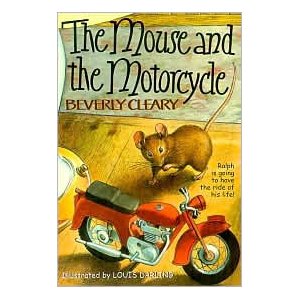 My family loves to read. We read aloud as a family every night and every extra opportunity we have. Our love of books is very evident in the huge number of book shelves scattered all around our house. Each child has a bookcase in their rooms, we have one in the upstairs hall, and the playroom downstairs has wall to wall bookshelves on one end filled with books. And all that is with us using the public library to borrow as many books as possible rather than buying them.

We also love to read book series and books that have been made into movies. I enjoyed seeing the kids' reactions to a movie we watched after first reading the book. They were appalled that the movie left out so many parts of the book they liked and changed things right and left. It was a good lesson in "the book is always better than the movie".

I think this whole "read a big book aloud" thing started on a rainy Sunday when I brought out The Mouse and the Motorcycle to read to the kids while they played LEGO. We read for a while in the mid morning, then ate lunch, read more in the afternoon, had dinner, then finished the book at bedtime. I wasn't really sure if my youngest, who was probably 4 at the time, would have the stamina to sit through the whole thing and stay interested, but he did. After that I decided to bring out all of the books I loved as a kid to read to MY kids. And so far, they love it, too.

Recently a friend asked me to send her a list of some of our favorite books and book series for her to read to her children. Her youngest is in 1st grade, and she wanted to make sure the books would be simple enough for that child to follow. Below is the list I sent to her. These are all books and series Hubby or I have read to my kids. Some kept their attention better than others but overall they were all well received. Happy Reading!

Simple chapter book series 1st Graders may be able to read partly by themselves:
Jigsaw Jones
Junie B Jones
A to Z mysteries
Cam Jansen
Geronimo Stilton
Flat Stanley
Elmer and the Dragon

Bigger stories but still simple enough for 1st graders to follow:
Magic Tree house
Little house on the prairie series (Little house in the big woods is first) (has a TV series)
Ramona series (starts with Ramona and Beezus) (has a movie)
Secrets of Droon series
Keyholder series (This side of Magic is the first book)

Any book by Judy Blume, Beverly Cleary, or Roald Dahl is a good choice.