One food that has been seriously missing from my Paleo/Primal lifestyle is Pizza! My kids love pizza, I love pizza, who doesn't love pizza? But there really isn't a convincing substitute for gluten-filled-carb-overload pizza crust. I've read about ones that use coconut flour and a combo of riced cauliflower and almond cheese and ones that are primarily a almond flour pie crust, but they all sounded pretty complex with varying degrees of authenticity. So, rather than trying to recreate something that you just can't recreate like the original, I decided to go with a variation of The Paleo Project's Breakfast Pizza but make it a regular old pizza with sauce, pepperoni and onions. The upside to this kind of pizza is that it's very fast and easy to make! The crust wasn't as sturdy as a gluten-filled one, but I could still pick it up and eat it. You do know you're eating eggs, but I think it's a good alternative when I have a pizza craving. 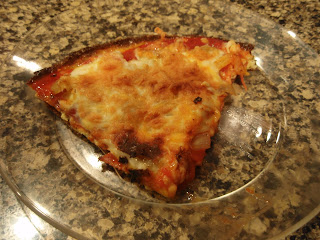 In a large oven safe skillet (cast iron or stainless steel) melt 2 T coconut oil. In a small bowl whisk eggs and milk; add salt and pepper to taste. When oil is melted pour egg mixture into skillet on top of oil. Lower heat to medium, cover and let cook for 3 minutes. DO NOT TOUCH EGGS. After 3 minutes are up, remove lid and place pan of eggs under a broiler on low for another 3 minutes. DO NO TOUCH EGGS.

Meanwhile in another skillet melt 1 T coconut oil and saute onions and peppers until lightly browned and softened.

After the 3 minutes, remove eggs from oven. Spoon pizza sauce over eggs then add a layer of pepperoni or other cooked meat. Add sauteed onions and peppers and any other veggies you like. (if making a primal pizza sprinkle cheese on top of pizza.) Place pan back under low broiler for another 3 minutes, but watch carefully to make sure toppings and cheese do not burn!

Remove from oven and let cool for about 5 minutes. Then slice and serve.
Posted by Angie H-P at 1:00 PM