My garden produced quite a few beets this year...not as many as a couple years ago, but a decent amount all the same. Although I like beets, the rest of the family aren't fans. Rather than making beets for myself, I decided to put them into something everyone would enjoy. I remembered hearing about beet cake before, but I'd never tried to make one. This seemed like the perfect opportunity especially since The Boy had been asking me to make red velvet cake anyway. Beets...Red Velvet...same thing, right?

First I had to cook and puree my beets. This a very simple process. First I trimmed my beets cutting off all but about 1/2 inch of the stem. I put the beets in a microwave safe dish with high sides, covered them with water and cooked in the microwave for about 25 minutes in 5 minute intervals poking them every 5 minutes to see if they were soft. When they were cooked and cooled I trimmed the remaining stem then put them into the blender with about a cup of cooking water. (add more water if your blender needs  more) Voila, beet puree!

This cake is Dairy-Free, Gluten-Free, Paleo and Primal. I made my cake into cupcakes so they would be easily snack-able and pack-able by my kids, but you could make it into a full sized cake. I may look for some cream cheese icing to put on them, too. That would just put them over the top. Enjoy! 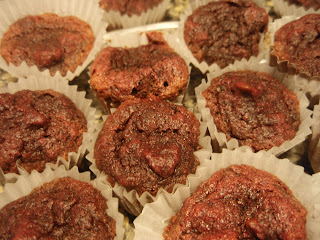 Preheat oven to 350. Separate eggs, putting whites into a large mixing bowl and yolks into a blender. In the blender mix dried plums, egg yolks, vanilla, beet puree, cinnamon, baking soda, and salt until well blended. Beat egg whites and honey with a hand mixer until stiff. In a separate bowl mix almond flour and cocoa powder then mix in the beet mixture from blender. Fold the egg whites into the beet and almond flour mixture. Spoon 1 T of batter into lined mini muffin tins or 1/4 C batter into lined regular sized muffin tins. Bake mini muffins for about 15 minutes or until set; Regular sized muffins take about 20-25 minutes to bake. This made about 6 regular sized cupcakes plus 36 mini ones.
Posted by Angie H-P at 9:17 AM