I love fall! I love Halloween and Thanksgiving. I love the colors of fall and the smells of the food that you seem to get only this time of year. One of my favorite things about fall is Pumpkin Pie. Every Thanksgiving I make Pumpkin and Pecan pie for the pot luck dinner we host for our friends. This year will be a little different as I'm not really eating the same foods I've eaten in the past. So I've been thinking about to do with my traditional foods and my non-traditional eating style. The more I thought about Pumpkin Pie the more I realized that it is very easily adaptable to Paleo eating. I've seen some recipes floating around lately with some interesting ingredients used to make pumpkin pie, but I think Pumpkin Pie is easier than that. 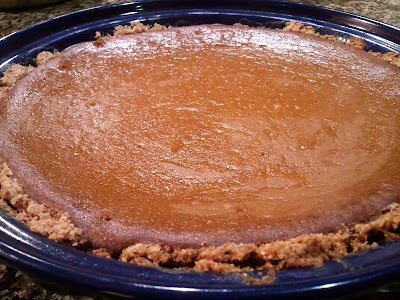 For the crust, I used almond flour, coconut oil and shredded coconut. For the filling I used pumpkin puree, coconut milk, pumpkin pie spice, eggs, honey and vanilla. That's it. The crust is the main difference between this version and traditional, but it's really a lot like a graham cracker crust. The filling is virtually identical to the original with only the coconut milk substituted for regular milk and honey substituted for sugar. Simple, easy and tasty. The kids didn't even know I'd changed the recipe when they had their dessert tonight. So I'd say that's a success! 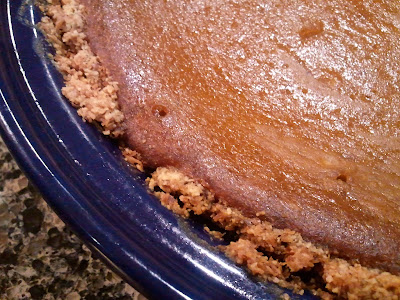 Update:
Turns out that the crust is very coconut-y with the shredded coconut. It's more like a pumpkin coconut pie, which is good, but not like traditional pumpkin pie. So I'm going to work on another one with all almond meal or maybe almond meal plus coconut flour.
Posted by Angie H-P at 7:12 PM