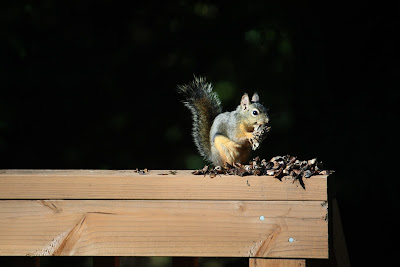 About a month ago I was startled awake at O-Dark-Thirty in the morning by what sounded like someone hitting my roof and the side of the house. I got up and went down stairs to see who to yell at only to find nothing obvious. I was still hearing the banging but had no idea what was causing it. Then I saw a fir cone bounce off the deck...but why was it raining fir cones? I stepped outside onto the deck and almost got beaned by a cone, but I was able to see WAAAAAAAAYYYY up at the top of the fir tree a teeny tiny squirrel throwing down the cones. And he just kept doing it! For the next few days he threw down every cone in that tree and the ones next to it. And he always did it at about 6 in the morning, which was earlier than I wanted to get out of bed. Throughout the days after he'd made his morning haul, he would scurry over, pick up a cone and scurry away behind a tree. Or on some days he'd scurry around, find a cone and perch on the edge of the deck to tear it apart and eat the seeds inside. 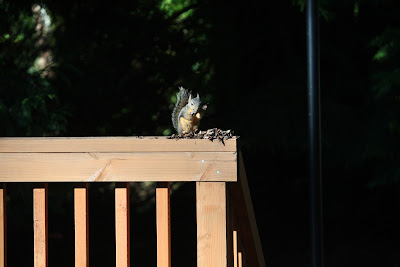 If he wasn't so darn cute, I'd have to do something mean to him to get him to stop making noise in the morning and leaving a mess on the deck.  I even saw him chasing a much larger grey squirrel around the yard the other day. I guess he's claimed our back yard as his domain and nothing else can share his territory. But he's so fun to watch, I guess he's become our backyard mascot.
Posted by Angie H-P at 8:43 AM