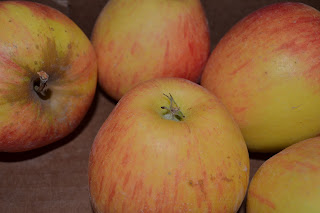 My friends, Kate and Debbie, have recently jumped on the Paleo bandwagon with me and have either been missing their morning porridge or "cheating" and eating oatmeal for breakfast anyway. When I saw a hot cereal recipe on the Paleo Parents blog I knew it was going to be a hit. Today for lunch my daughter requested "something like oatmeal" so I took that recipe, gave it my own twist and came up with the recipe below. I loved it and will make it again for sure. I like that it keeps well for several days; I can make a big batch on the weekend and just heat and serve for breakfast during the week. We added several mix-ins like dried blueberries, cranberries, chocolate chips (for the kids), extra cinnamon, shredded coconut, and extra diced apple. The combinations are endless. (We had already eaten lunch and put the extra away when I remembered to take a picture, so this is a picture in the storage container.) 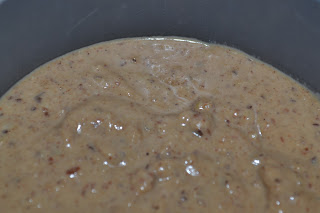 3 C milk (can be almond, coconut or regular depending on what you eat)

Peel and core apples and set peels aside for next step. Dice apples then in a saucepan saute in coconut oil until soft and browned. Stir in cinnamon.

While apples are cooking, in a food processor pulse nuts, plums and apple peels until you form a sticky mass. After apples are cooked add nut mixture and milk to saucepan with apples. Stir to break up any lumps then simmer on low heat stirring often until mixture is bubbly. Serve immediately with any mix-ins you like. Save leftovers for several days in the fridge.
Posted by Angie H-P at 1:10 PM