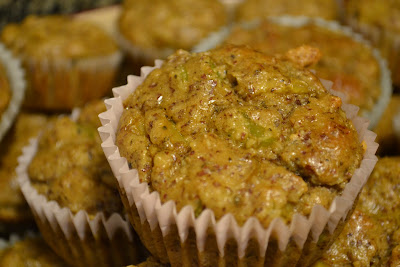 I wasn't sure if I wanted to try to make a paleo substitute for the traditional dressing I usually make on Thanksgiving.  (For those of you not from the South, instead of calling it stuffing - because you're not stuffing it in a bird - we call it dressing. ) The recipe I've made for years is a take on the one my grandmother made for years and it's almost a sacred recipe. That was a lot of pressure. But I decided to give it a try and if it didn't taste right it'd still probably taste good enough to eat tomorrow as a day-after-thanksgiving side to go along with the leftover turkey.


I wasn't sure how to approach the making of paleo dressing since dressing is basically a savory bread pudding made with cornbread, white sandwich bread, eggs, spices, stock and veggies. Without the bread, what do you do? So I decided to try something entirely different and based the dish off of an almond meal muffin recipe. The result was amazing! I used a muffin tin to make individual portions, but I'm sure you could bake the mixture in a cake pan to make a traditional looking pan of dressing. I think the almond meal really gave the dressing the same coarse texture that you expect in a corn bread dressing. Add to that the traditional spices and you really feel like you're eating Mama's Thanksgiving dressing. Enjoy! 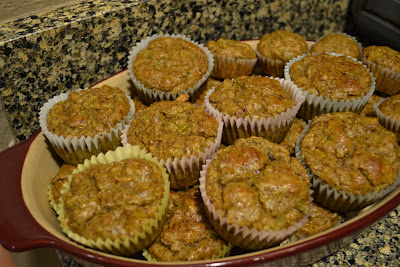 Preheat oven to 350F In a large mixing bowl, mix Almond Meal, salt, soda, sage, and marjoram. Mix in broth and eggs. When cooked veggie mixture is cool, add to Almond Meal mixture. Spoon batter into lined muffin tins and bake for about 25 minutes for large muffins and 15 minutes for mini muffins. This recipe made 18 full size muffins and 6 mini.
Posted by Angie H-P at 11:25 AM