This week I received an eggplant in my veggie box. I have no idea how to cook an eggplant. But on that same day I noticed a recipe on the Primal Recipe Archive for Ethiopian Stew that included eggplant. I didn't have most of the ingredients for that stew, but it sparked the idea of making a stew with that eggplant and other ingredients I had on hand. As it turned out, the eggplant didn't play a starring role in the stew and you could probably leave it out entirely without noticing. But since it was the ingredient that inspired the entire meal, I thought it deserved a mention. The stew, however, ended up tasting quite hearty and will make a nice warm-up dinner several nights this week. 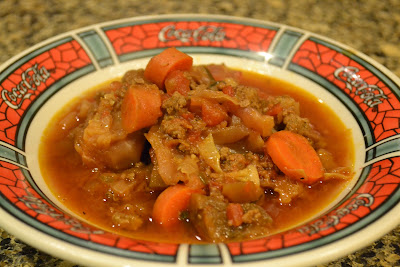 In a medium skillet (I prefer cast iron), brown ground beef then put it in a crock pot. Brown diced onions then add to crock pot with meat. To the crock pot, add the peeled and cubed eggplant, sliced carrots, chopped cabbage, tomatoes, stock, water, garlic, turmeric, cinnamon, and ginger. Turn crock pot to high and cook for about 4 hours (6-8 hours on low). About 30 minutes before serving, stir in the basil, chives, vinegar, cumin, salt and pepper to stew. Continue cooking on low for an additional 30 minutes. Serve and enjoy!