'Tis the season for apple cider! One of my favorite drinks during the holidays is Warm Mulled Apple Cider. For Thanksgiving Dinner the last few years I've pulled out the crock pot and filled it with apple cider and mulling spices and let it sit on Low most of the day. Young and old alike love a mug of this golden yumminess.

This morning when I got up, I was in the mood to make muffins, and once I looked into the fridge and saw the jug of apple cider, I knew just what kind to make. Apple Cider Muffins! I was also sadly lacking in my usual muffin starter of almond flour, so I used coconut flour instead. They turned out very apple-y and cinnamon-y and were a big hit with both small and large family members! 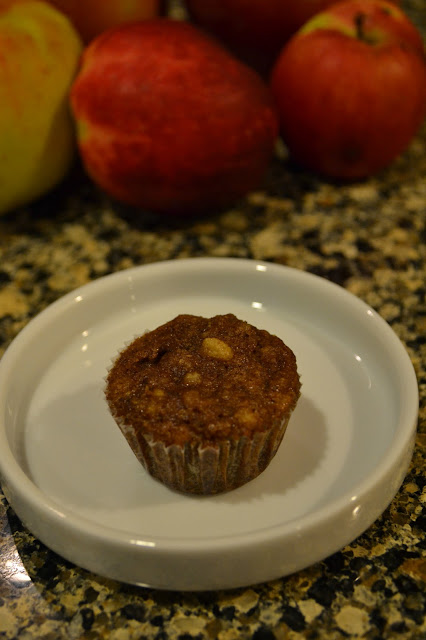 Preheat oven to 350F. Core, peel and dice apples saving peel to use. Separate eggs. In a blender add apple peels, apple cider, egg yolks and maple syrup. Blend until mostly smooth. In a small bowl, beat eggs to soft peaks and set aside. In a larger bowl, combine coconut flour and coconut oil; let sit for a few minutes allowing flour to absorb oil. Add blended mixture to coconut flour mixture then add cinnamon, cloves, baking soda and diced apples. Lastly fold egg whites into mixture. Scoop 1/4 cup of mixture into lined muffin tins. Bake for about 25 minutes or until muffin is slightly firm when you press on the top.
Posted by Angie H-P at 1:47 PM