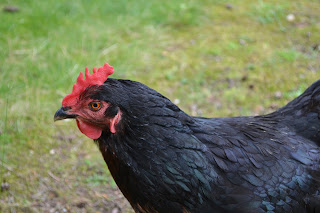 We've been keeping chickens for about 6 years now...wow, has it really been that long?!? We began by buying 6 laying hens from a farm in southern Washington then moved on to brooding our own chicks. The largest number we ever had at one time was 60 chickens including chicks and full grown birds (we sold a few of the chicks and slaughtered some of the grown roosters shortly after). Right now we have about 25 (mostly old hens and a few chicks), which is probably more than we really want to have. It's nice to have a large supply of eggs coming out of the hen house every day, but now our chickens are old and not laying like we would like. And we haven't replaced them with new chicks like we should have. So we have a dozen plus chickens eating feed and producing nothing while the rest are still too young to lay. Yesterday we got 1 egg...yes, you heard that correctly, 1 egg...from 25 chickens. How pathetic is that? So we have a plan to revitalize our hen house and reduce the size of the flock in the process. 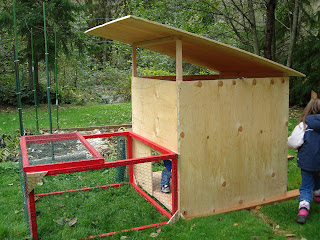 (this is the original coop before paint)

When we started keeping chickens we built a cute little red hen house that is perfectly sized for about a dozen chickens...then we got more chickens and outgrew that cute little hen house. It got pushed aside to use as a brooder and we bought a 8x10 metal shed to use as a coop and expanded their run space to be a good portion of the back yard. That shed was plenty big enough to for our largest flock, but feeding, watering and egg gathering got to be a messy production after almost no time at all. All of those things lived inside the metal shed with the chickens, which means they got covered in chicken droppings, mud and such. Hubby's morning routine of feeding and watering the chickens got messier and messier until he was ready to throw in the towel and throw out the chickens. So I got to work on a plan to remodel our original cute little coop into something easier to use and much less messy, and since our goal is to reduce the flock down to about a dozen chickens again, the size is perfect. After remodeling and adding a nice sized outside enclosure it could probably house closer to 20, but I don't really think we want that many anymore. 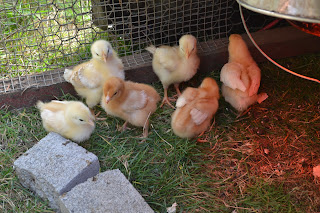 The original coop had a few problems that I planned to address this time around.
To remedy these problems I made some modifications to the coop design. 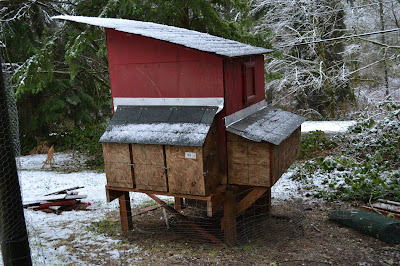 Bump-out to the right is for food and water. One to the left is for eggs. Notice the nice roofing job on all horizontal surfaces! 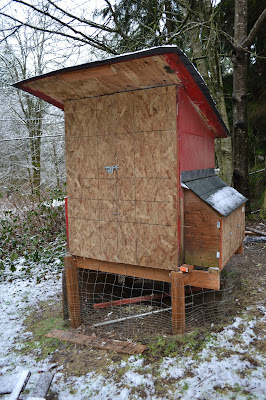 New front door that opens completely on both sides. Everything needs a red coat of paint, but otherwise it's pretty well finished. 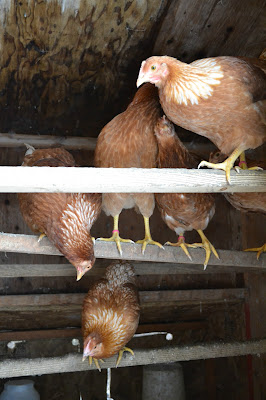 "Chicks" in their new home. Soon to be joined by a few select old ladies. Not sure if you can see it in this picture, but we put hot pink zip ties on the legs of these gals. When it comes time to eat the old ones we need to know which ones really are old. If we put a different color band on the legs of the chicks each year we can keep track. 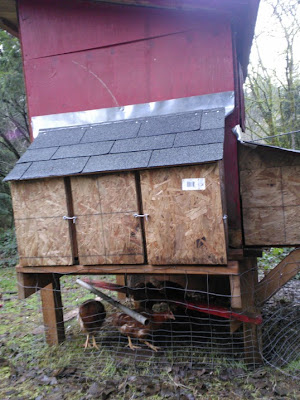 Girls going for a walk under the coop. I put a couple of roosts down there as well, but I'm not sure they are using them.
So far, it seems this newly remodeled coop is working pretty well. The chickens drop down to their outside space to peck around, and they sleep up on their warm dry roosts every night. The real test of how user-friendly the coop is will be when we tell the kids they are now in charge of the food and water refilling and the egg gathering. If they can manage to do all of those things without getting messy, then we will know we've succeeded! 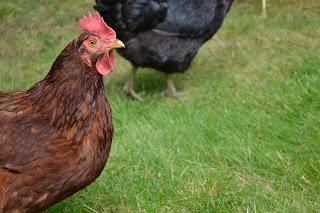