I've been on a mission to get more protein in my kids in the morning before school. They don't eat paleo exclusively and breakfast is where they really want to have their grains and carbs. For the most part I don't push, but offer food I think is better for them. Sometimes they go for it and sometimes they don't. Last week I had a little extra weekend time and decided to make egg cups to keep in the fridge for the week's breakfasts. The boy wanted bacon and cheese in his and the girl wanted pizza flavored. I wasn't sure exactly how to go about that, but I gave it a shot and she seemed to like them. Each morning, she would get out one of her egg cups, put it in the microwave for a few seconds to knock off the chill and gobbled it down. Give them a try! 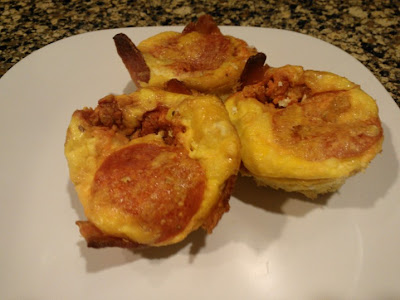 Pizza Egg Cups
6 eggs
6 slices of bacon cut in half
6 Tbs pizza or pasta sauce (I like classic or newman's own)
6 pepperonis
optional : olives, peppers, mushrooms, or other pizza toppings.

Beat 6 eggs in a bowl with a fork. In a muffin tin, lay half of a slice of bacon across the bottom then lay the other half on top of it making an X in the bottom of your pan. Spoon in egg until it reaches almost to the top of the muffin cup. Place 1 Tbs of sauce in the middle of the egg then top with pepperoni slice. Add any optional ingredients you would like. Bake at 350 for about 30 minutes or until eggs are set. Cool then eat!
Posted by Angie H-P at 9:51 AM