Here's another one inspired by what was left in my refrigerator the day before the veggie box arrived.  It turned out very yummy, and when the garden is producing this summer I'll most definitely make it again! The kids got creative with the lemon before I used it. This one had a ridge on the top and looked like a chick. They called the Chickie Lemon. :) 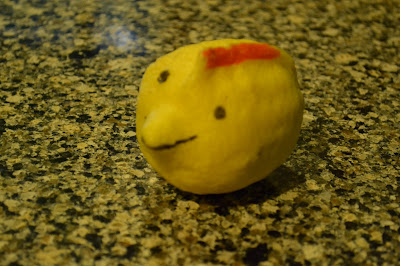 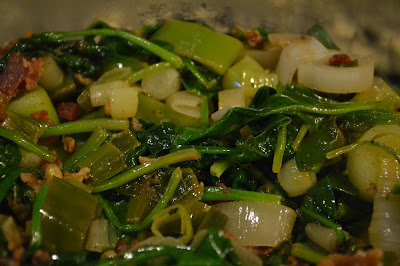 Spinach, Leeks and Bacon
1 bunch of Spinach, trimmed or about 2 C baby spinach
2 leeks, sliced and rinsed well
2 T coconut oil or butter
juice from 1/2 lemon or about 1/4 C lemon juice
salt and pepper to taste
2 Strips of crumbled bacon or about 1/4 C bacon bits (optional)

Melt oil in a skillet and sauté sliced leeks until just starting to brown and get soft. Add spinach and lemon juice to pan, cover and cook for about 2-3 minutes until spinach is just starting to turn a darker green. Remove from heat and mix in bacon, salt and pepper if you're using it. Serve warm.
Posted by Angie H-P at 3:17 PM