The Girl's Scout troop went camping this past weekend. Their awesome leader wanted to give the girls exposure to multiple camping cooking techniques. Throughout the weekend they learned baking in a Dutch oven, baking in a box oven, roasting in foil over the fire, cooking omelets in zip lock bags in boiling water and cooking pancakes over a camp stove. I was in charge of the morning coffee cake cooked in a Dutch Oven and wanted to make it a tasty Paleo treat. I couldn't seem to find many Paleo camp cooking recipes using a Dutch oven, so I found a few conventional coffee cake recipes and adapted them to Paleo ingredients and the Dutch oven.

Although we made this cake using charcoal briquettes and campfire coals, you could use the same recipe in your oven at home. I didn't get too many good pictures of the results, but everyone seemed to love it and several came back for seconds. 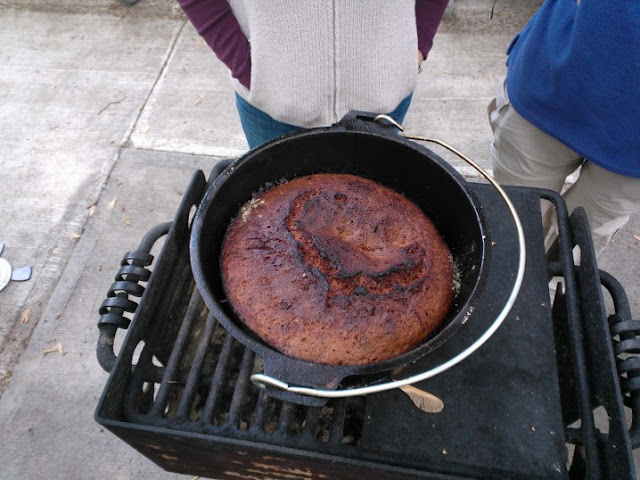 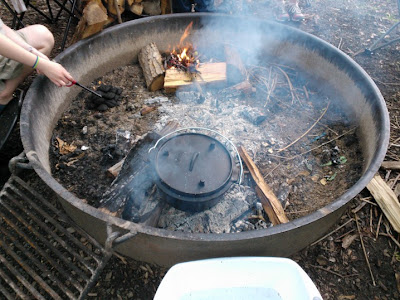 If making in a Camp setting: Spray Dutch oven with coconut oil spray or grease the pan with coconut oil. Mix all cake ingredients together in a large bowl then pour into the Dutch Oven and set aside. Mix all cinnamon ribbon ingredients together in a small bowl then drizzle over cake batter in Dutch oven. Light 6 charcoal briquettes and set Dutch oven on top of charcoal. Light 18 more briquettes and place on top of Dutch oven. Bake for about 30-40 minutes. Test for doneness with knife in center of cake.

If making in a home oven: Preheat oven to 325 degrees.  Mix cake ingredients, and pour into a deep pan or 2 round cake pans.  Mix cinnamon ribbon ingredients in a small bowl  then drizzle over cake batter in pan.  Bake 28-30 minutes. Test for doneness with knife in center of cake.
Posted by Angie H-P at 10:27 PM