I'm volunteering at my local Girl Scout camp this summer and asked a few questions about the food they'll be serving at camp. Since I'll be there all day, I wanted to make sure that the food offered would be something I could eat, but I also wanted to find out how campers with allergies or food sensitivities were handled. As part of the camper experience each camper gets to learn a cooking method based on age. The youngest ones make fruit salad and other no-cook recipes, second graders get to do propane stove cooking. Third graders do aluminum foil cooking and stick cooking; fourth graders learn to cook with a box oven; fifth graders cook with a dutch oven and sixth graders get to pick their favorite method.

The dish the group cooks is decided by the girls themselves based on their method. I asked what happened to girl with allergies if her group chose to cook something she couldn't eat. In the past, the girl had to help to make the dish she couldn't eat, then had to come back to the kitchen to get an alternative meal. That just didn't seem right to me. So I asked a few more questions and found that the camp leaders were more than happy to have gluten, dairy and nut free dishes as options, but just didn't have the recipes or time to research them. This is where I come in to the picture! I've got a ton of appropriate recipes to offer and the background to know how to recreate others that more closely match traditional Girl Scout dishes. So, I embarked on my mission!

I already had a paleo brownie recipe (I'll post that one soon!), but recreating traditional Girl Scout Dump cake was a bit harder. This dish usually uses a can of pie filling (apple, cherry, peach), a boxed cake mix and a stick of butter. Since a lot of those items wouldn't work for a camper who can't eat gluten or dairy, I set to making my own version. I researched pie filling and found that the Wilderness and Comstock brands are both gluten free. They use a small amount of corn starch as a thickener and use sugar or cane juice to sweeten, but they were about as good as a can of pie filling could get in this situation. I think if I was making it for my own family I'd choose fresh fruit or a can of fruit in fruit juice as an alternative to the pie filling. On top of the fruit, I created a sponge cake that used coconut and tapioca flour as a base. I didn't include any sweetener in the cake as the pie filling was sweet enough for the whole cake. I was also trying to make this one nut free in case other campers had nut allergies.

This recipe will be cooked in either a Dutch oven or a box oven at camp, so when I did my test run I cooked it in a Dutch oven. The result was very tasty! I took the cake to a get together today and everyone thought it was good. One 10 year old came back for seconds! So if you are looking for more recipes to make in your Dutch oven while camping or at home, this one might be one to try. 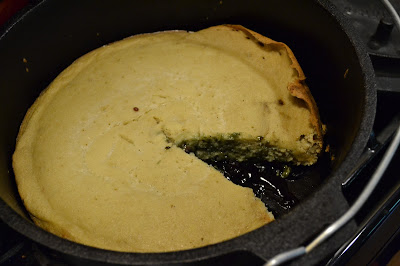 In a Dutch oven or a deep pie dish dump the can of pie filling or fruit. in a separate bowl, mix all other ingredients until well blended. Pour batter over fruit. Cover Dutch oven if using. Bake in a 350F oven (or use 6 briquettes below and 18 briquettes on lid of Dutch oven) for 45 - 55 minutes or until knife comes out clean from center of cake. 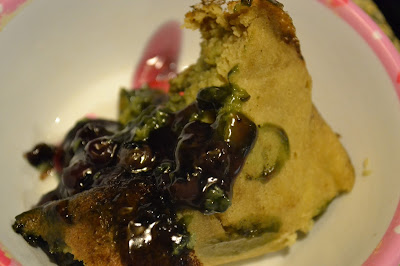